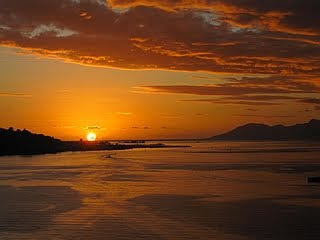 ​Day 19 Papeete, Tahiti, French Polynesia. Is is a gorgeous South Pacific day. The sun is hot, the skies partly cloudy, and there is a nice breeze off the ocean. Papeete is a modern developed city. The port is busy with several cruise ships, a ship from China with several 100 foot diameter satellite dishes, a roll on roll off ship unloading cars, some container ships, and general cargo ships.

The harbor also has many private yachts. It is only a short walk from our gangway to the almost bustling center of town. I say almost as today is Saturday and most shops and stores are closed.

I take a seven hour bus tour around the entire island. We see the Norman Hall house with many artifacts of his varied career, black sand beaches, a lighthouse, several museums, and stop at several overlooks. The scenery is as expected, lush heavy vegetation, rocky coast line, steep mountainous peaks. We also pass three of the four McDonalds on the island and the one KFC that failed. Chickens run wild on the island and free for the taking, so the natives didn't see any value in unhealthy fried chicken.

There is essentially one road that encircles the island. With everything being closed today the traffic wasn't bad, but on workdays the traffic jams are horrendous, our guide says that he must leave his house at 4 AM to arrive in town by 8 AM.

The sunset this evening is gorgeous, I hope the picture above does it justice. Something I have never seen before, just as the sun is going below the horizon, the last sliver turns bright green for a fraction of a second. I tried but did not capture it with my camera. Maybe next time.

The staff roasts several pigs in the Lido deck for a Polynesian dinner. There is only one show this evening at 9:30, A group of native drummers and dancers performing traditional Tahitian dance and music.

I do have to tell you about the arrival of our most traveled passenger to the Queen's Lounge. Dolly arrives with no less than seven of the ships staff. She is on the arm of the hotel director, I don't recognize the others. They carry a chair for her and place it in a vacant spot about 10 feet from the edge of the stage, the spot I now recognize as where she always sits. Her glass of wine arrives seconds after she sits. She is dressed in a reddish burgundy floor length gown with matching evening gloves that come four inches above her elbow. Formal dress of the 20's and 30's is not dead.

Our next port, Moorea is twelve miles away. We leave Papeete at 5:00 AM to arrive by 7:00. We are not going to Cook's bay as originally planned, but another only a few miles away.

Steve
I have been retired since 2005, and moved to central Florida in 2009. With 5 ports within driving distance I soon realized the ease of cruising. Despite having cruised many times, it was only as I was booking a 115 day cruise circumnavigating the world that a number of my friends convinced me to start writing a blog. Since internet speed on the high seas is often only slightly better than non-existent, my cruise postings may be erratic, and pictures will be a seldom included luxury. My other passion is model railroading and for several years I have been constructing the SP&K in my home. I hope you enjoy following my travels and the construction of my railroad, and invite you to post any comments or questions. Thank You.